An important milestone towards the construction of a quantum computer is the generation and investigation of large quantum systems. To this end, photons – the particles of light – are promising candidates. Physicists of the group of Professor Harald Weinfurter (Ludwig Maximilian’s University Munich and Max Planck Institute of Quantum Optics, Garching, Germany) succeeded in developing a new method for the generation of intense, ultra-short light pulses in the ultraviolet (UV) wavelength region at high repetition rates (Nature Photonics, January 31, 2010, DOI: 10.1038/NPHOTON.2009.286). These pulses are essential for the generation of multiple entangled photons and also very interesting for other applications like for example optical spectroscopy.

A major resource for quantum information processing is entanglement. The properties of two entangled quantum particles, e.g. two photons, are strongly correlated independent of their distance. However, the individual properties of the photons are completely random. By means of this (dubbed by Albert Einstein) “spooky interaction on a distance” quantum states can be transferred from one quantum particle on to another.

The goal of the Munich scientists is to investigate larger systems of quantum particles, i.e., to generate as many entangled photons as possible. Using the process of “down conversion”, a blue photon undergoes the conversion into a pair of entangled red photons by optical nonlinear processes inside a crystal. Since this conversion takes place very rarely the rate of entangled photon pairs is usually very low.

To generate several entangled photons at once, ultra-short, high intensity pulses at UV wavelengths are required. At the same time, a high repetition rate is needed to keep the measurement time as short as possible. The Munich team was able to fulfill these demands by transferring a method working in the infrared wavelength region to the more powerful ultraviolet region. For the first time they implemented a resonator to enhance UV light pulses with pulse duration in the femtosecond regime (10-15 seconds) at a high repetition rate (82 MHz). Inside the resonator the pulses continuously add up if each incoming pulse overlaps exactly with the pulses already stored in the resonator. The light intensity created in the resonator exceeds those of comparable commercial laser systems by at least a factor of five.

Roland Krischek, who co-constructed and characterized the light resonator, sees a lot of potential: “The light resonator allows us to study entanglement of larger quantum systems.” His colleague Witlef Wieczorek adds: “This resonator can be furthermore used to analyze, for example, molecular formation or carrier dynamics in semiconductors.” 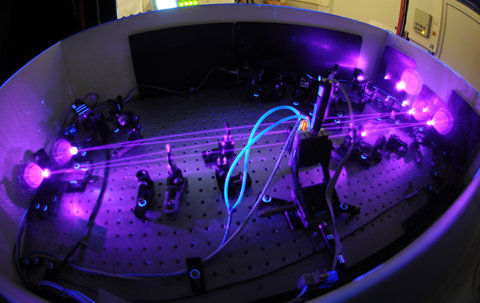 Figure:
The ultraviolet light pulses are enhanced inside the four-mirror resonator. The crystal used for the generation of entangled photons is situated in the black box (connected to blue tubes). Photo: Thorsten Naeser