Swinging of a single atom

A father pushing his little child on a swing realizes a complex feedback procedure: the signal of the approaching swing is processed in his brain and actuated by his arms pushing with the right power and at the right moment. The fast feedback logic developed by a team of scientists around Prof. Gerhard Rempe, Director at the Max Planck Institute of Quantum Optics and head of the Quantum Dynamics Division, works quite similar: the system reacts, in real time, on the motion of a single atom orbiting in an optical cavity (Nature, N° 2009-08-10110A, DOI: 10.1038/nature08563). Individual photons emitted by the atom and carrying information about the atomic position trigger a feedback mechanism that pushes the atom in a direction determined by the experimentalist. This allows him to control the motion of the atom. It increases the time the atom spends in the cavity by a factor of four, but is – even more important – a step towards the exploration of the quantum trajectory of a single atom at a level allowed by Heisenberg’s position-momentum uncertainty relation.

The experiment starts by cooling a dilute cloud of neutral rubidium atoms with laser light down to a temperature of a few microkelvin. The cold cloud is then launched – like a fountain – towards a high-finesse optical resonator, made of two highly reflecting mirrors separated by about one tenth of a millimeter. Upon arrival in the resonator, one single atom is captured by suddenly turning on optical tweezers in form of a focused standing laser light wave reflected back and fro between the mirrors. As the trapped atom is sensitive to a variety of different forces, its motion consists of a regular oscillation around the resonator axis superimposed by a strong erratic motion in all directions. This makes the trajectory of the atom unpredictable on time scales not much longer than the oscillation period, typically less than a thousandth of a second.

Now a second laser comes into play that is used as the input signal of the feedback loop. It probes the position of the atom: if no atom is in the resonator, the light of this laser is fully transmitted through both mirrors. If an atom is placed in the center of the resonator the light is blocked and the photon flux drops to rates as low as 0.03 photons per millionth of a second. When the atom moves away from the resonator axis, trying to leave the resonator, more light is transmitted. The position of the atom is thus encoded in the intensity of the transmitted light. To read this information, the photons leaving the resonator are registered by a sensitive detector for two consecutive time intervals of equal duration, the so-called exposure time.

In case more photons are detected in the second time interval than in the first time interval, it is concluded that the atom is trying to escape the resonator. To prevent this, the light intensity of the optical tweezers is ramped up, pushing the atom back to the resonator axis. In case fewer photons are detected in the second time interval, the atom is assumed to approach the cavity axis and the power of the optical tweezers is lowered. This reduces the energy of the atom and leads to an efficient cooling of the atom. The atom can also be heated by inverting the feedback logic. This rapidly expels the atom out of the resonator. “It is important to note that the feedback is triggered by each detected photon. If the number of detected photons goes up from 0 to 1, the intensity of the optical tweezers is ramped up almost immediately, in a time interval that is 70 times shorter than the oscillation period of the atom”, Alexander Kubanek, PhD student in the Quantum Dynamics Division explains. “Actually, we have to pay attention that the exposure time is neither too short nor too long”, he specifies. “For very short times the information about the position of the atom is insufficient to trigger the desired feedback. If on the other hand the exposure times are too long, the feedback is delayed, leading to a reaction out-of-phase with the atomic oscillatory motion. So we have to choose exposure times that are long enough to give information on the position of the atom, but are yet much shorter than the oscillation period of the atom in the optical tweezers.”

The feedback mechanism increases the storage time for a single atom from about six milliseconds without feedback to 24 milliseconds with feedback. Longer storage times exceeding 250 milliseconds are achieved by a more sophisticated technique. But more important than the mere prolongation of the storage times are the quantum mechanical implications of the experiment. “It proves that reliable position information can be obtained by quasi-continuous measurements”, Prof. Gerhard Rempe points out. “In the future this might allow us to steer an individual quantum trajectory with a precision ultimately determined by Heisenberg’s uncertainty relation or even protect the quantum state of a trapped particle against the disastrous influence of fluctuations stemming from the atom’s environment.” [OM] 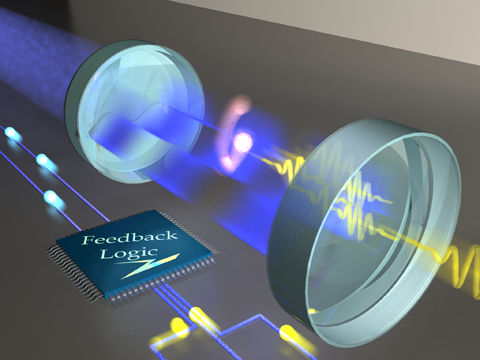 Figure: Artist’s view of the feedback scheme: A single atom placed between two highly reflecting mirrors reveals information about its position by emitting single photons (yellow wave packets). These photons are converted into digital electrical pulses (yellow spheres) and processed in an electronic feedback circuit. The circuit emits an electric current (blue spheres), which alters the intensity of a blue laser (blue valley). This feedback loop swings the atom depending on its measured position.