A team at the Laboratory for Attosecond Physics of LMU Munich and MPQ in Garching has succeeded in reducing X-ray sources of typically several kilometres in size to the dimensions of a dining table.

This involved a new method using a combination of laser light and hydrogen plasma.

The potential of laser technology seems inexhaustible. Fresh proof has now been presented by an international team at Munich’s Cluster of Excellence “Munich Centre for Advanced Photonics” (MAP), in the Laboratory for Attosecond Physics (LAP) of Ludwig Maximilian’s University of Munich and Max Planck Institute of Quantum Optics (MPQ) in Garching. Also involved were Dresden-Rossendorf Research Centre and Oxford University’s Clarendon Laboratory (UK). The physicists are the first to succeed on the laboratory scale in producing soft X-ray radiation by means of laser light. This is done by first generating pulses of electrons with intense laser flashes. The laser beam accelerates the electron pulses to approximately the speed of light within a distance a thousand times shorter than that required by conventional techniques. These are then focused into a short undulator with alternating magnetic fields inside it, which forces the electrons to oscillate and thus causes them to emit X-ray radiation. The experiment shows that it is possible to produce so-called brilliant X-ray radiation by means of light. A brilliant light source contains a very large number of photons of the same wavelength that are bunched in to a beam. Such radiation affords many more applications than ordinary X-ray radiation. Up until now, however, it could only be produced with the help of kilometre-long accelerators. LAP’s scientists have now opened the way to produce brilliant X-ray radiation in much more compact device. This is reported in the online edition of Nature Physics (DOI: 10.1038/NPHYS1404 , 27. September 2009).

Since its discovery at the end of the 19th century, X-ray radiation has provided insights into worlds invisible to the naked eye. It is difficult to imagine today’s medicine, physics, materials science and chemistry without it. Meanwhile, it is possible to image structures that are no bigger than atoms, but this calls for brilliant x-ray radiation. Currently, such radiation is produced by the use of expensive accelerators that are kilometres long, thus making it not generally accessible. There are just a few facilities in the world that are capable of producing highly brilliant X-ray radiation. Brilliant radiation contains a very large number of photons (light particles) that also move in phase.

A team around Prof. Florian Grüner and Prof. Stefan Karsch at the Laboratory for Attosecond Physics now aims to provide brilliant X-ray radiation inexpensively in a compact device.

The physicists have now reached an important milestone. By means of intense laser light and a plasma of ionized hydrogen atoms, they have for the first time succeeded at a laboratory of LMU and MPQ in producing soft X-ray radiation with a wavelength of about 18 nanometres. For this purpose the physicists used laser pulses lasting just a few femtoseconds, a femtosecond being a millionth of a billionth of a second. On this ultrashort time scales, the light pulses reach powers of about 40 terawatts; for comparison, an atomic power plant generates powers of about 1000 megawatts, which is 40,000 times less.

The enormous powers of the pulses are only made possible by their extreme shortness. The strong electric and magnetic fields of the light pulses separate electrons from hydrogen atoms and thus produce a plasma. These electrons are accelerated with the same laser pulse to almost the speed of light within a distance of only 15 mm, which is more than a thousand times shorter than that needed by conventional technologies used to date.

The electrons then enter an undulator, a device 30 centimetres long and 5 centimetres wide. It produces magnetic fields that force the electrons to take an undulating sinusoidal path, which transversely accelerates the electrons, causing them to emit photons in the soft X-ray range. So far, only light in the visible to infrared ranges, i.e. with much longer wavelengths than that of X-radiation has been shown with similar methods. The reason underlying the desire to gain access to the shortest possible light wavelengths is to be sought in the laws of optics. They state that with light one can only image structures equivalent in size to its wavelength. That is to say, if an object is investigated with X-ray light with a wavelength of 18 nanometres, it has to be at least as big in order to be resolvable. Atoms and numerous molecules, however, are much smaller.

The physicists’ next step is to further increase the energy of the electrons propagating through the undulator. For this purpose the scientists will increase the energy of the light pulses producing the electrons. The prime objective of Prof. Florian Grüner’s group is to realise a laser-driven free-electron laser whose light is about a million times more brilliant than the undulator radiation now measured. The radiation should then have wavelength of just a few nanometres. It could afford completely new, detailed insights into the microcosm of nature. The radiation can likewise be applied in, for example, medicine to detect minute tumours before they can spread. This would greatly enhance the chances of curing cancer patients.
Thorsten Naeser

Description for undulator photo: Interior view of the undulator. Laser light (red) drives electrons (yellow) though the undulator, so that they pass though the alternating magnetic fields inside it. On their undulating sinusoidal path the particles are decelerated and accelerated, causing them to emit X-ray radiation. Photo: Thorsten Naeser,processing: Christian Hackenberger 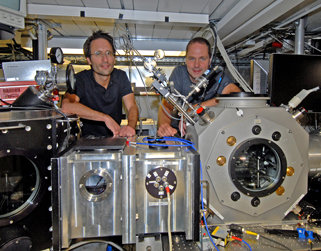