A team of physicists achieved the control over single electrons in a multi-electron system with waveform shaped laser pulses.

A German-Dutch team with physicists from the Max Planck Institute of Quantum Optics in Garching, the Institute for Atomic and Molecular Physics AMOLF in Amsterdam and chemists from the Ludwig Maximilians University Munich achieved the control over single electrons in a multi-electron system with waveform shaped laser pulses.

Predatory fish are well aware of the problem: In a swarm of small fish it is hard to isolate prey. A similar situation can be found in the microcosm of atoms and molecules, whose behavior is influenced by “swarms” of electrons. In order to achieve control over single electrons in a bunch, ultrashort light pulses of a few femtoseconds duration are needed. Physicists of the Max Planck Institute of Quantum Optics (MPQ) in Garching and chemists of the Ludwig Maximilians University Munich (LMU) succeeded for the first time to use light for controlling single, negatively charged elementary particles in a bunch of electrons. The scientists achieved a major milestone that they aimed for within the excellence cluster “Munich Center for Advanced Photonics” (MAP). They report their results in the journal “Physical Review Letters” (online version: EID 103/103002, 1. September 2009).

Electrons are extremely fast moving particles. In atoms and molecules they move on attosecond timescales. An attosecond is only a billionth of a billionth of a second. With light pulses that last only a few femtoseconds down to attoseconds it is possible to achieve control over these particles and to interact with them on the timescale of their motion. These short light pulses exhibit strong electric and magnetic fields influencing the charged particles. A femtosecond lasts 1000 times longer than an attosecond. In molecules with only a single electron, such as the deuterium molecular ion, their control with such light pulses is relatively easy. This was demonstrated in 2006 by a team of physicists including Prof. Marc Vrakking and Dr. Matthias Kling from AMOLF in Amsterdam and Prof. Ferenc Krausz in Garching (MPQ).

Scientists led by the junior research group leader Dr. Matthias Kling (MPQ) in collaboration with Prof. Marc Vrakking (AMOLF) and Prof. Regina de Vivie-Riedle (LMU) have managed to control and monitor the outer electrons from the valence shell of the complex molecule carbon monoxide (CO) utilizing the electric field waveform of laser pulses. Carbon monoxide has 14 electrons. With increasing number of electrons in the molecule the control over single electrons becomes difficult as their states lie energetically very close to each other.

In their experiments the scientists used visible (740 nm) laser pulses with 4 femtoseconds duration. The control was experimentally determined via an asymmetric distribution of C+ and of O+ fragments after the breaking of the molecular bond. The measurement of C+ and O+ fragments implies a dynamic charge shift along the molecular axis in one or the other direction, controlled via the laser pulse.

The femtosecond laser pulses initially detached an electron from a CO molecule. Subsequently the electron was driven by the laser field away from and back to the ion, where it transferred its energy in a collision. The whole process took only ca. 1.7 femtoseconds. ”The collision produces an electronic wave packet which induces a directional movement of electrons along the molecular axis” says Regina de Vivie-Riedle. ”The excitation and subsequent interaction with the remainder of the intense laser pulse leads to a coupling of electron and nuclear motion and gives a contribution to the observed asymmetry” explains Matthias Kling.

The scientists could also image the structure and form of the outer two electron orbitals of carbon monoxide via the ionization process. The extremely short femtosecond laser pulses allowed the scientists to explore this process in the outermost orbitals. They found the ionization of the molecules to take place with a distinct angular dependence with respect to the laser polarization direction. This observation was found to be in good agreement with theoretical calculations and also gave a contribution to the observed asymmetry. The scientists could show that the strength of this asymmetry strongly depends on the duration of the laser pulses.

With their experiments and calculations, the researchers from Garching and Munich have achieved an important milestone that they aimed for within the excellence cluster “Munich Center for Advanced Photonics” (MAP). The goals were to achieve and observe the control of single electrons within a multi-electron system.

Electrons are present in all important microscopic biological and technical processes. Their extremely fast motion on the attosecond timescale, determines biological and chemical processes and also the speed of microprocessors – technology at the heart of computing. With their experiments the researchers have made a further, important step towards the control of chemical reactions with light. The results are also related to basic research on lightwave electronics aiming at computing speeds on attosecond timescales. Thorsten Naeser 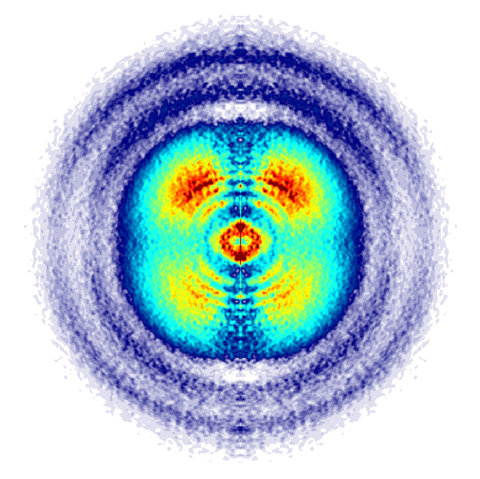 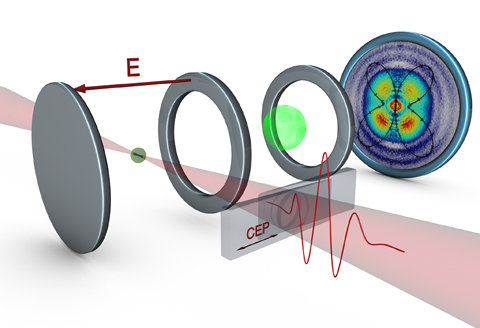 Figure 2: Setup for the measurement of the control of single electrons in molecules with ultrashort laser pulses: the waveform of the laser pulses is controlled via two glass wedges. The laser pulses interact with the molecules in a velocity map imaging (VMI) spectrometer, in which the resulting distribution of ions (here C+ ions) after the break-up of the molecules is imaged onto a detector (right). The image on the detector displays an up-down asymmetry along the vertical polarization axis of the laser. The symmetry of the ionized orbitals of CO becomes visible by the 45° contributions in the angular distribution, which can be predicted by theoretical calculations (black line). Illustration: Christian Hackenberger/LMU