A new look at the building blocks of life

Living matter exhibits an almost infinite variety of molecular diversity. An understanding of this complexity is only possible if particular structures are known in detail. However, many secrets of nature are still unsolved.

A team at the Laboratory of Attosecond Physics (LAP) in the group of Dr. Ernst Fill, headed by Prof. Ferenc Krausz, has now taken an important step forward on the way to more detailed exploration of molecular structure. The researchers used a combination of short light and electron pulses. For the first time they were thus able to record time-resolved diffraction images of transiently aligned molecules. Femtosecond laser pulses were used to generate the alignment and electron diffraction was applied for its demonstration. This work is opening the door for future experiments exploring molecules and their dynamics. This research is reported in Physical Review Letters 102, 213001 (2009). The article was especially highlighted by the editors („Editors Suggestion“).

The wave nature of electrons was experimentally proved for the first time in 1927. Soon these negative particles gained importance as a tool for structural analysis of solids and molecules. Electrons scattered from molecules in the gas phase generate diffractograms which can give valuable information on molecular structure, e.g. on the distances between the atoms in a molecule. In theory it had already been shown that three-dimensional structural information can also be obtained from these data.

Molecules can be aligned with the help of laser pulses. The high electric fields of laser radiation rotate them in the direction of polarization. Diffraction from such aligned molecules could open the way to three-dimensional sturctural analysis of large molecules. Now, for the first time LAP scientists have demonstrated that this is indeed possible. Light-induced alignment of a relatively simple molecule (diiodotetrafluoroethane) has been visualized by means of time-resolved electron diffraction.

The experiment was conducted using laser pulses which selected molecules with the right orientation. For this purpose a linearly polarized laser pulse dissociated a good fraction of the molecules, i.e. one of the atoms was separated from the parent molecule. This reaction occurs preferentially in molecules with the dissociation axis oriented parallel to the laser polarization direction. The products of this separation are therefore aligned immediately after the laser pulse has passed.

The process was observed by means of the pump probe technique. In applying this method the delay between the pulses initiating the reaction and those probing it is varied. With this technique the scientists could observe the reorientation of the molecules, i.e. how the initial alignment was lost by the rotation of the molecules. The exciting laser pulse was 100 femtoseconds long, whereas the electron pulses following lasted a few picoseconds. (A femtosecond is the millionth part of a billionth of a second; a picosecond lasts a thousand times longer.)

With this experiment the scientists working with Dr. Fill and Prof. Krausz demonstrated for the first time the possibility of recording diffraction images from aligned molecules. These results are a first step towards three-dimensional display of molecules by means of electron diffraction. Further steps will be necessary to improve the temporal resolution by shortening the electron pulses from the picosecond to the femtosecond region. By analogy with the use of very short acquisition times in photography one could then also directly observe ultrafast processes occurring in the microcosm of life.
Thorsten Naeser 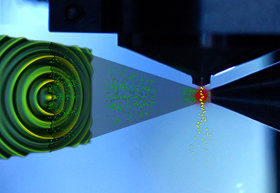 Arist´s view into the vacuum chamber housing the experiments on time-resolved electron diffraction: Ultrashort electron pulses (electrons symbolized as green balls) emerging from a small orifice to the right impinge on a molecular gas jet. The jet streams out of a nozzle (gas molecules symbolized as yellow balls). The electrons are scattered from the gas molecules and generate a diffraction image on the detector (schematically displayed in the left part of the picture, rotated towards the observer for better visualization). In the region where the electron pulses and gas jet overlap the UV laser (invisible in reality) is illustrated as a red circular spot. Photo: Thorsten Naeser; layout: Christian Hackenberger