Every shot on target

Obtaining a snapshot of the inner life of atoms is one of the primary objectives of attosecond physics: flashes of light lasting just a few hundred attoseconds (1 as =10-18 seconds) should enable the movement of electrons around the nucleus to be seen. These flashes of light are generated by means of broadband, ultrashort intensive laser pulses in the visible and near infrared spectral range (400 - 1000 nm). The form and phase of the carrier wave generating the pulse has to be accurately determined and controlled. Until now, the only possible means of measurement was to take an average of a large number of already phase-stabilised pulses. A team led by Professor Reinhard Kienberger (Leader of the independent Attosecond Dynamics Junior Research Group in the Attosecond Physics Division headed by Professor Ferenc Krausz at MPQ and professor at the Technical University of Munich with the Munich-Centre for Advanced Photonics Cluster of Excellence) in conjunction with Professor Gerhard Paulus, University of Jena, has developed a new method which allows individual laser pulses to be fully characterised for the first time (Nature Physics, Advance Online Publication, 19 April 2009, DOI 10.1038/NPHYS1250). The scientists are determining the properties of the carrier wave from the spectra of the electrons released by the individual pulse in xenon gas. The advantage of this method is that it can also be used for laser pulses with low repetition rates, such as those required to generate very high-energy attosecond flashes. However, the new technology also improves the conditions for investigating other phase-related reactions, such as the dynamics of ionisation processes or molecular dissociation processes.

In the experiment described here the physicists shoot ultrashort high-intensity laser pulses into a gas target and then determine the energy and direction of the electrons that are released. The pulses are polarised in a linear direction, which means that the electric field vibrates in a plane perpendicular to the propagation direction. The intensity progression of the pulse is determined by the pulse envelope. As the illustration shows, in a few-cycle laser pulse the electric field strength is very much dependent on the relative position, i.e. the phase, within the envelope, which in turn has a critical influence on the effect of the pulse when it meets an atom. For that reason laser pulses with pre-stabilised phases are used at high repetition rates.

"All previous experiments have taken the average of a large number of laser shots for a single measuring point, averaging them out over (negligible) phase fluctuations. At low repetition rates, e.g. 10 Hertz, the individual pulse phases differ substantially," explains Professor Reinhard Kienberger. "We need to determine the absolute phase of a laser pulse in the individual shot, and that required a technical advance and a completely new approach to data evaluation."

The fewer cycles the laser pulse contains (see Figure 1), the more strongly the relative phase influences the result of the reaction. Thus – in rather simplified terms – the highest-energy photoelectron would be expected to be thrown to the left (relative to the propagation direction) in pulse A and to the right in pulse B. However, this only applies to electrons which are accelerated at the precise moment at which the field strength reaches its maximum. The strong laser field means that they receive far more energy (up to ten times more) than they need for release from the atom, and for that reason they are also known as ATI (above-threshold ionisation) electrons. By limiting the experiment to high-energy photoelectrons, it is therefore possible to draw conclusions from their direction about the relative phase of the carrier wave. Comparing the directional asymmetry of the ATI electrons in various energy ranges gives us clear information about the phase of the pulse that released the electrons from the gas. In a series of measurements in which they used non-phase-stabilised pulses or selectively varied the phase of stabilised pulses, the MPQ scientists were able to demonstrate empirically the anticipated and also numerically calculated asymmetry in the emission of photoelectrons. In this way they were able to determine the relative phase of the carrier wave for individual laser pulses with an accuracy of just a few degrees (Figure 2). The quality of phase stabilisation in lasers with high repetition rates can therefore be checked more accurately than before. 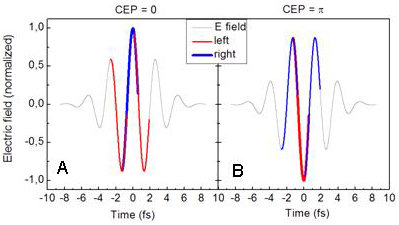 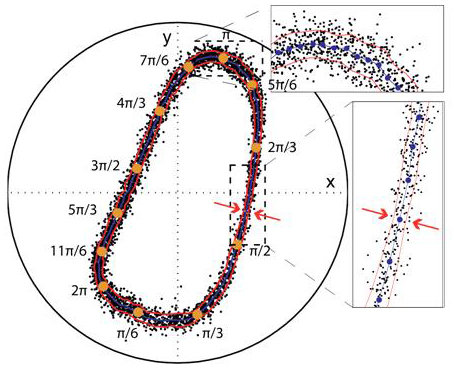 The method described here can also be used to select laser pulses with the desired phase for the generation of high-energy attosecond flashes in the kiloelectron volt range. One of the greatest challenges in laser development at present is to further reduce the pulse lengths so as to obtain laser pulses comprising just one wave train. Since, as numerical calculations show, the asymmetry in the ATI electron spectra strengthens as the pulse length decreases, the method described here is an ideal means of characterising these pulses. Olivia Meyer-Streng