Advances in biomedical research would not be possible without advances in the identification and analysis of the proteins contained in living cells. Mass spectrometry has become established as a key technology in this field. However, it requires individual molecules to be present in the gas phase in electrically charged form. The sensitive macromolecules can easily be destroyed during the necessary preparatory stages. Researchers at MPQ in conjunction with the University of Esslingen have now developed a new and exceptionally gentle preparation method. Some years ago the MPQ researchers patented a method for the surface deposition of atoms and molecules from beams of neutral molecular clusters. Now, as reported in the journal Angewandte Chemie (10.1002/ange.200804431 DOI), Dr. Christoph Gebhardt, Dr. Anna Tomsic, Dr. Hartmut Schröder, Professor Michael Dürr and Professor Karl L. Kompa (Emeritus Director at MPQ and Head of the Laser Chemistry Group) have succeeded for the first time in applying this method of desorption by transient matrix to large biomolecules such as insulin. The method combines a simple sample preparation technique with a very gentle release process, in which even large molecules remain completely intact.

The Laser Chemistry Group led by Emeritus Professor Karl-Ludwig Kompa has been working for some time with clusters of polar molecules (i.e. the molecules have two charge centres but are outwardly neutral) which form when the feed gas expands into the vacuum. These snowball-like entities comprise 1000 to 10,000 individual molecules, corresponding to a diameter of around 10 nanometres. The cohesion between the molecules in the cluster is only weak, however. Driven by a helium gas jet, they reach the test surface at around three times the speed of sound.

In the experiment described here, the researchers shoot clusters of sulphur dioxide molecules onto solid surfaces which have been pretreated with a film of dissolved biomolecules. Owing to the polar nature of the cluster, during this impact it is able to entrain a biomolecule which has picked up a positively charged hydrogen atom from the solvent (see also the illustration). For a period of just ten picoseconds – that's one hundredth of a millionth of a second – the cluster heats up on impact with the surface. Then the hot cluster explodes, while the released biomolecule – which is electrically charged – can be analysed individually in a conventional mass spectrometer. "We can imagine the clusters as the smallest conceivable unit in which chemical reactions can take place, like a nanoscopic test tube. The impact with the surface destroys the test tube, allowing us to analyse the reaction products – provided they are electrically charged – at our convenience. What we are doing here is effectively nanochemistry," explains Dr. Hartmut Schröder. 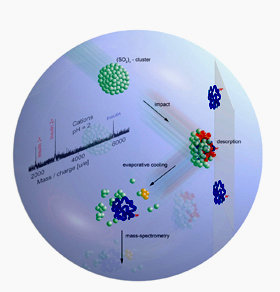 The scientists analysed a number of different biomolecules prepared in this exceptionally gentle way, including bombesin, angiotensin and insulin, using time-of-flight mass spectrometry. Here the mass is derived from the time taken by the charged molecule to cover a given distance after acceleration in an electrostatic field. The measurements showed that not only can the individual biomolecules be identified in this way but also, and most importantly, the desorbed molecules survive the powerful cluster surface impact completely undamaged. "Even now the method is extremely sensitive in the femtomol range," says Professor Karl-Ludwig Kompa. "The next step is to take this method forward from the research stage towards the point at which it can be put into use," adds Professor Michael Dürr. "To do so we need to acquire a better understanding of the processes underlying desorption and also to establish the technical conditions for a further increase in sensitivity." For that reason work is set to continue on this method as part of the existing partnership between MPQ and the University of Esslingen. [OM]