Recent innovations in laser technology have provided radiation sources for attosecond (10-18 sec) light flashes that can freeze the ultrafast motion of electrons inside atoms and molecules. The range of possible applications is however limited by the low flux of the current attosecond sources. In a proof of principle experiment a team of MPQ scientists (Attosecond and High-Field Physics Division, Prof. Ferenc Krausz) has now demonstrated a novel way of generating attosecond light flashes with unprecedented intensity. The article by Y. Nomura et al., (Nature Physics, Advance Online Publication December 14, 2008, DOI 10.1038) confirms that relativistically driven overdense plasmas are able to convert infrared laser light into harmonic XUV radiation with high efficiency. Furthermore it demonstrates the feasibility of confining unprecedented amounts of light energy to within less than one femtosecond. The long term goal – reaching sub-atomic resolution simultaneously in space and time - will have far-reaching impact, from physics and chemistry through biology and medicine to future information technologies.

State of the art technique for producing ultrashort coherent light pulses in the XUV spectral range is the method of generating “harmonics” by converting laser light travelling through a gas target to radiation whose frequency is an integer times the frequency of the fundamental oscillation. By contrast the scientists focus short laser pulses from the Titanium-Sapphire-Laser ATLAS (IR, 800 nm) onto a solid target creating an overdense plasma on its surface in which the electrons oscillate in the strong laser field with velocities close to the speed of light. Here two mechanisms give rise to harmonic generation. On the one hand the electrons reflect the incoming laser light causing (depending on their direction) a Doppler shift towards higher frequencies. On the other hand – and this process is the dominant one in this work – the electrons that are injected into the surface excite plasma waves in their wake. Under certain conditions these are converted to electromagnetic radiation at higher harmonics of the driver frequency. A spectral filter suppresses residual IR-light and selects a range of harmonics.

“There is no way to measure the time structure of the sequence of out coming attosecond flashes directly”, says Dr. George Tsakiris, leader of the project. “We therefore have to resume to a trick: we let two replica of the attosecond pulse train interact with a Helium gas jet. By varying the time delay between them and recording the corresponding number of resulting Helium ions we can deduce the temporal structure of the XUV radiation.” “We have demonstrated for the first time that the harmonics from solid targets are indeed emitted as a train of attosecond pulses”, adds Rainer Hörlein, PhD student at the experiment. 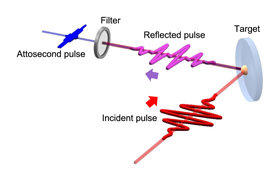 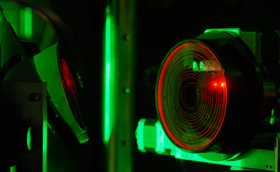