New collaboration with scientists in the field of laser science. 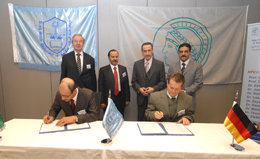 Over the coming years the Max Planck Institute of Quantum Optics (MPQ) in Garching near Munich will closely collaborate with scientists from King Saud University in Riyadh (Kingdom of Saudi Arabia) in the field of laser science. This statement was made by Professor Ferenc Krausz, Managing Director of MPQ, and Professor Ali Al-Gamdi, Vice Rector of KSU, on the occasion of a small start up ceremony at MPQ on November 20, 2008. MPQ and KSU scientists will work together on the development of novel radiation sources for coherent ultrashort intense light pulses that promise to benefit both fundamental and industrial research. The MPQ-KSU cooperation is part of the KSU Nobel program that aims at promoting novel technologies in the Saudi Arabic society. The contract that was signed by Professor Abdullah Al-Othman, rector of KSU, and Professor Ferenc Krausz on January 16, 2008 – on the occasion of the visit of high-ranking Saudi Arabian politicians like the Minister of Higher Education, Dr. Khalid bin Mohammed Al-Angari, and leading scientists from Saudi Arabian universities – establishes a frame of close and long lasting cooperation in the fields of applied laser development and nanotechnologies. As far as the MPQ is concerned especially the Laser Spectroscopy Division of Nobel Prize winner Prof. T.W. Hänsch and the Attosecond and High-Field Physics Division of Prof. Ferenc Krausz are involved. .“We are looking forward to cooperate with MPQ, one of the leaders in the field of photonics”, says the Saudi Arabic research team leader, Prof. Abdallah Azzeer. “Moreover, we intend to expose our students to Nobel Laureates as scientific role models, and want them to benefit from their expertise and distinguished experience.”

In the beginning the cooperation pursues three projects. Common goal is the development of novel radiation sources for coherent ultrashort intense light pulses. At the border of the visible/near-infrared spectral range (at wavelengths around 800 nm) such light pulses have been available for a number of years. Extending the technical capability of generating intense, near-single-cycle waveforms to the ultraviolet or (near) infrared spectral ranges would open up a number of exciting research opportunities, reaching from fundamental research to semiconductor technologies.

State-of-the art-technique for producing light pulses of that kind is the method of generating “harmonics”: laser light travelling through an optical nonlinear medium gives rise to radiation whose frequency is an integer times the frequency of the fundamental oscillation. Prof. Reinhard Kienberger (MPQ and Technical University of Munich) is leader of a project that aims at producing light pulses in the deep ultraviolet with unprecedented durations. High-density noble gases will be used as the nonlinear conversion target, driven by ultra-intense 800-nm-wavelength laser pulses of a few-cycles. This method may lead to the first high-intensity pulses approaching the 1-femtosecond frontier. “Intense few-femtosecond light pulses in the deep ultraviolet spectral range opens, for the first time, the door for steering electrons on molecular orbitals”, Dr. Kienberger explains. “This constitutes an entirely new approach to coherent control of molecular processes and chemical reactions.“

The project that is headed by Dr. Jens Rauschenberger (MPQ, Ludwig Maximilians University) and Dr. Thomas Udem (MPQ) is supposed to extend the spectral range even further down to the extreme Ultraviolet (XUV). Here the conversion target shall be placed inside a resonator arrangement. Due to the recycling effect of unconverted fundamental radiation in the resonator, significantly higher conversion efficiencies can be reached. Also higher average powers in the XUV can be accomplished without compromising on the pulse repetition rate.
Drawing on these advantages the frequency comb technique could be extended to the XUV spectral range, thus providing further verification of quantum electrodynamics. “However, also appealing applications in industry exist”, Dr. Rauschenberger points out. “Most prominently, the characterization of optical elements for XUV semiconductor lithography at 13 nm wavelength will be a key ingredient in the race towards ever smaller semiconductor structures and ever faster computers.”

Dr. Laszlo Veisz on the other hand leads a project that pursues the conversion of powerful pulses (10-TW, 8-fs, 800-nm) from MPQ’s LWS-10 (Light Wave Synthesizer 10) high-power source, which comprise approximately three field oscillation cycles, to near-infrared pulses confined to a single field cycle at a carrier wavelength between 1 µm and 2 µm. This frequency conversion is due to stimulated Raman scattering in molecular gases (H2 in this experiment). In this process the laser light changes the vibrational and rotational modes of the molecules by transferring energy to them. “Light pulses of that kind would truly be a spectacular achievement”, Dr. Veisz says. “We should be able to produce coherent short-wavelength radiation in the kiloelectronvolt photon energy range. Furthermore we could exploit entirely new mechanisms for efficient laser-driven acceleration of high-density monoenergetic electron beams.”
The contract as it was signed on January 16, 2008, is valid for a period of three years, but it is supposed to be renewed automatically. In a first step excellent students and PhD students from King Saud University will be trained in the projects described above. “We hope to not only accelerate progress in the development of novel light sources, but to also contribute to the spreading of photonics, which is one of the most important technologies of the future”, Prof. Krausz sums up. [OM]