MPQ scientists succeed in simulating a quantum magnet with the aid of trapped ions.

Nowadays the behaviour of single quantum particles is no longer mysterious. However even simple systems made of a few particles are too complex to be described and understood using classical computers, and the road to universal quantum computers is still a long one. Dr. Tobias Schätz, leader of the junior research group 'Quantum Simulations' at the Max Planck Institute of Quantum Optics in Garching near Munich, and his collaborators Hector Schmitz, Jan Glückert and Axel Friedenauer decided therefore to take a short cut. Following a proposal by Professor Ignacio Cirac (Director at the MPQ and Head of the Theory Division) and Dr. Diego Porras (MPQ, Theory Division) they were able to prove experimentally that a quantum system can be simulated with ions stored in a Paul trap. In the experiment described in a recent publication (Nature Physics, DOI 10.1038/nphys1032, Advance Online Publication on 27 July 2008) they simulated the phase transition of a quantum magnet from paramagnetic to ferromagnetic order. Since this concept can be extended in principle to larger systems, simulations of that kind could be used to obtain deeper insight into complex phenomena such as high-temperature superconductivity.
The magnetic behaviour of certain chemical elements goes back to the properties of their individual atoms: these have an internal spin that is connected to a magnetic moment. Because of mutual spin-spin-interaction neighbouring atoms tend to orient in the same direction, going from a disordered paramagnetic state to a strictly ordered ferromagnetic state. The orientation is fixed by the presence of a static external magnetic field.

Tobias Schätz and his collaborators use this kind of a transition to prove the feasibility of quantum simulations of a quite simple system consisting of two atomic elementary magnets. The idea behind it is to simulate a quantum system that cannot be steered directly using another system in which the behaviour or properties can be controlled and influenced, thereby making it possible to address and answer the same questions. In this case each elementary magnet is simulated by a magnesium ion. Both ions are stored and extremely well isolated in a so called 'Paul-trap'. Analogous to a magnet which can orient either towards north or towards south, each ion can take on one of two slightly different energy levels. The influence of an external magnet – rotating the magnet either north or south – is simulated by a radio frequency field which makes the ions switch their energy level. Spin-spin-interaction is mimicked by a standing wave of two laser beams which either pulls or pushes the ion depending on the particular energy state it is in.

The transition of the paramagnetic to the ferromagnetic phase is investigated in the following way: the magnesium ions in the trap are irradiated with a radio frequency field. At the same time the intensity of the standing wave field is continuously ramped up. As soon as the (simulated) spin-spin-interaction becomes much stronger than the (simulated) magnetic field the radio frequency and the laser field are switched off. In order to determine how many ions are in which energy state the physicists make use of the fact that only one energy level can be excited to emit light. So, if both ions are gleaming they are in the same state, and the system is in ferromagnetic order with the spins pointing – according to definition – towards the north. If no ion emits light, the phase is ferromagnetic again, but the spins are directed towards the south. In case one of the ions emits light, the neighbouring ions are in different energy states and the system behaves like an antiferromagnet.

Performing the measurement under identical conditions about 10,000 times, and repeating it again with different experimental parameters the scientists are able to deduce the probability of the mutual orientation of the two quantum magnets in each case. As is shown in the figure both ferromagnetic phases appear with the same probability. Additional measurements show that the final state of the system is a coherent superposition of the two possible ferromagnetic orders. All spins are in parallel orientation, but they point towards north and south at the same time. This phenomenon can only be described by quantum mechanics. “With this kind of analogue simulation we can watch how the quantum particles are doing their work. Thus we can study which are the essential effects that lead to the – in the words of Einstein - 'spooky' superposition of states,” Tobias Schätz explains. “However, this measurement is basically a 'proof of principle' experiment. We have shown that an ion trap can be used as a simulator for simple quantum systems.” In order to address problems of higher complexity such as appear, for example, in solid state physics, the group aims to develop new sorts of traps with up to twenty times twenty ions. [O.M.] 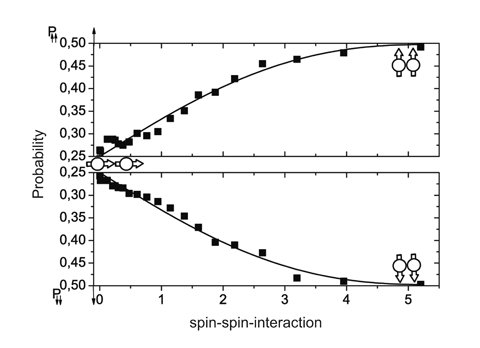 Figure: In the beginning the spins of the system are individually oriented at random such that the system is in paramagnetic order. With increasing spin-spin-interaction the system undergoes a quantum phase transition into a state which is a coherent superposition of two different ferromagnetic orders.