Quantum objects made of matter and light

We know that atoms can be bound to each other to form molecules. We also know that a molecule made only of light particles, photons, cannot be created because photons hardly ever interact. But what about a molecule made of matter and light, for example just one atom and a few photons? Such a molecule can indeed be formed under the condition that the interaction between the atom and a photon is strong enough. In this case the photons also start to interact with each other owing to the presence of the atom. This photon-photon coupling is at the origin of nonlinearities which can only be explained by quantum laws. In a recently published experiment (Nature Physics, 10.1038/nphys940) a team of scientists around Professor Gerhard Rempe, Director at the Max-Planck Institute of Quantum Optics, created a state of one atom and two photons and proved its nonlinear properties.

The research on which the MPQ scientists report should be viewed within the context of tremendous technological advances that were made possible in the laboratory of Prof. Gerhard Rempe to access and exploit the quantised nature of a few quanta of light interacting with single atoms. The experimental challenge comes with the theoretical requirement of having exactly one atom, that this atom must interact with two identical photons, and that the interaction should be strong enough to have the atom and the photons each lose their individual identity.

In the experiment, a vapour of atoms at ambient temperature is first cooled, so that the atoms become very slow. The scientists then isolate just one atom from the rest and guide it to a very specific region in space. The second step is to trap light, which is done by reflecting the light between two concave mirrors facing each other. The mirrors are separated by a distance as small as one tenth of a millimetre, and now enclose the atom. This tiny region is the heart of the experiment. The surrounding whole experimental setup occupies a space as big as anyone’s living room.

Such a small region comes with a big gift: by confining the light into a small region, the density of the light field becomes so strong that already one quantum of light is sufficient to perturb the atom. The perturbation is so large that the system behaves like a new molecule, but, intriguingly, such a molecule is made of matter and light. This molecule possesses an infinite number of possible configurations: one atom and one photon, one atom and two photons, one atom and three photons, and so on. All these configurations have distinct energies and can therefore be identified in the spectrum of the molecule. This prediction feeds theorists in quantum optics since half a century.

The simplest configuration - one atom and one photon - has been observed in several experiments. The main interest now lies in the configuration of one atom and two photons, because the two photons are predicted to interact by obeying a specific set of rules from quantum theory. As Dr. Karim Murr explains: “We can naively picture this in the following: if we have one atom and only one photon, the atom would just absorb and emit the photon several times. If now we have one atom and two photons, the atom would have to make a choice because it can absorb only one photon at the time. The big issue for the atom is the difficulty of the choice, because the two photons are exactly identical. So we can always say that the atom absorbs and emits each photon several times, but it is impossible to tell which photon is absorbed or which photon is emitted." The result can be seen as an effective interaction between the two photons, an interaction mediated by the atom.

As in the spectroscopy of conventional atoms and molecules, the atom-light molecule is excited by shining laser light onto it and by detecting the light emitted by it. The scientist Ingrid Schuster and her colleagues have performed two experiments. In a first experiment they varied continuously the colour of the laser light. At low laser intensity the energy spectrum of the molecule is that of one atom and one photon, a spectrum known for more than a decade. At higher intensity, however, they observe a second pronounced resonance in the spectrum for energies which are only consistent with the energy of one atom coupled to two photons. To excite this resonance, two laser photons have to be absorbed by the molecule at the same time. This effect has further been studied in a second experiment: the researchers found a trick to steer the coupled system in such a way that the state of one atom and one photon cannot be created at all. At low laser intensities, almost no light is transmitted, because photons from the laser arrive one by one, and these are rejected by the molecule. At higher intensities, however, the rate of laser photon pairs grows, so that the state of one atom and two photons is populated more and more rapidly. This leads to a nonlinear response in very good agreement with theoretical predictions.

This research serves first of all fundamental physics and there are several experiments to come to characterize this peculiar state of matter and light. The scientists also imagine possible applications. The coupled atom-light system could serve as a two-photon gateway where a single "gate" photon switches the propagation of another single photon. Such a single-photon transistor would find an application in quantum information science with stationary atoms and flying photons. [IS / OM] 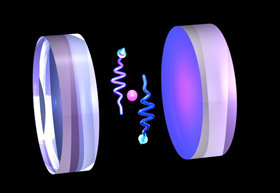 Figure: An atom between two high-quality mirrors simultaneously interacts with two light quanta (photons). This leads to a nonlinear behaviour in which two single photons need to cooperate to enter the cavity.